The X Factor V’s Stars In Their Eyes

TV talent shows are the scourge of a generation, none more so than the ITV’s primetime melodrama for the underclasses ‘X-Factor’. The shows so called judges sit in their ivory towers completely disconnected from real musical talent and real life itself in most cases. The chosen contestants hang off their mentors every word, hoping for that seal of approval via inane feedback such as ‘You made the song your own’ and ‘it was so current’….PLEASE!!!

Ok, so Gary Barlow has produced some half decent music over the years,  but he’s now so far up the royal’s backsides slobbering after a knighthood, that I feel embarrassed for him. To make matters worse and further reinforce my distaste for the show, my confused mother uttered this ball shrinking statement to me last year; ‘Phwoar..I really fancy Louis Walsh’. As you can imagine it took all of my being not to regurgitate my dinner. However, I took a moment to compose myself and calmly explained to her that there could be a chance he’s not that way inclined. The look of dismay, disappointment and bemusement on her face when she realised her loveable Louis may not be quite who she thought he was, made me question whether; A. I had been adopted at birth, or B. my poor mother had been subjected to a cruel lobotomy against her will. The knowledge that my mother finds Louis Walsh sexually attractive is something I may never fully recover from. Needless to say this was the last time I watched the show.

When I was growing up these type of talent shows seemed far more genuine and I’ve been thoroughly enjoying watching repeats of 90’s show ‘Stars in Their Eyes’ lately. Yes it was still crap telly. However, it was also the perfect storm of raw talent (talent in a loose sense of the word) and humour. A contestant resembling Rodney Trotter would discuss his musical influences and the many hours he spent perfecting his high G as he warbled to his work colleagues at the local abattoir. He mutters pointless garble about the act he’s going to perform as, meanwhile Matthew Kelly nods and smiles with complete disinterest then hurriedly prompts him for his introduction; ‘Tonight Matthew I going to be…..Lionel Ritchie’. Cue murmurs backstage from hair and make-up ‘We’ve got a hell of a job on are hands with this one’. The smoke machines go crackers and the plywood stage doors covered with the same fluorescent stars you had on your bedroom ceiling as a kid are winched open by two fellas using a pulley and rope system. In a matter of seconds an act of god like transformation occurs and Lionel appears to rapturous applause from arguably the most appreciative and polite crowd on television (They must have been getting back handers). 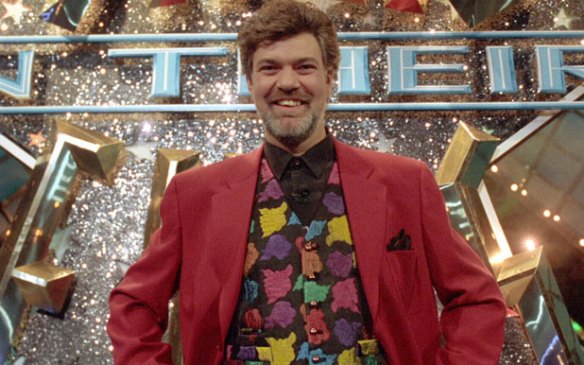 I can’t think for the life of me what the prizes were for the winners of Stars In The Eyes. Does anyone know? I’ve googled this and its still not given me an answer, which probably suggests the contestants got next to nothing. Certainly not a £1million recording contract and front page tabloid coverage.

No big budget, no PR stunts, no intense media coverage and no bullshit sob stories. Just everyday folk on the box having a good sing song, going back to their normal lives and not taking themselves too seriously. Times have most certainly changed!

This Episode features Brendan: A Welder from Widnes and his thirty Rabbits called….well ‘Rabbit’. Nice one Brendan!

Reeves & Mortimer with a Stars In Their Eyes rework

A Decade In The Shithouse by Modern Toss