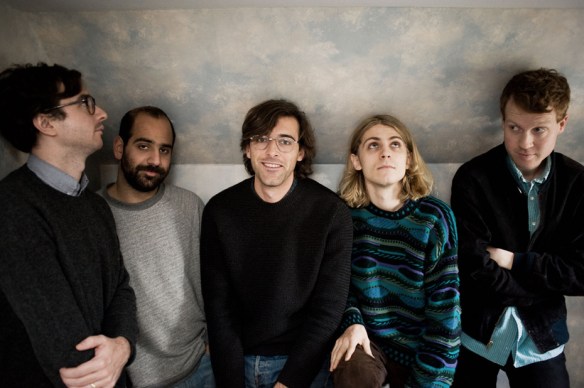 I was slow out of the blocks when it came around to checking out Brooklyn band, ‘Real Estate’. Their second album ‘Days’ instantly became a regular listen when I stumbled across them in 2012, with tracks ‘Green Isles’ & ‘All The Same’ on repeat for months. They really are the best thing since sliced bread, apart from sliced bread’s a bit shit isn’t it? How about a sliced cinnamon bagel with lashings of salted Lurpak, oh you little sweet yet savoury delight you!!!

The long and short of it is I’m raving about this band and ‘Days’ features some of the most beautiful strings on any album I’ve heard. It’s a gem of a record.

Real Estate we’re formed in 2008 by singer/guitarist Martin Courtney, guitarist Matt Mondanile, bassist Alex Bleeker and drummer Etienne Pierre Duguay. Their first self-titled album received big props from critics in the US and despite a few changes in personnel along the way the band went onto produce superb second album Days on Domino Recordings, released in October 2011.

Their third studio album ‘Atlas’ got its UK release (also on Domino) this week and I must say it’s a little ball of lushness. It’s another great record, but is it as strong as ‘Days’. I’m not so sure. I’m giving the Atlas yet another listen as I’m writing this and the final track off the album ‘Navigator’  is something else.

Along with ‘Navigator’, I’m leaning towards opener ‘Had to Hear’ and recent single release ‘Talking Backwards’ as my vote for the strongest tracks on the album. ‘Had to Hear’ in particular picks up where ‘Days’ left off with those brilliant jangle, folky rock strings that we’ve come to associate with the band. To return with an album as credible as ‘Days’, was always going to be a tall order, but hats off to these talented chaps, I reckon with they might just have pulled it off.

You can download ‘Atlas’ at iTunes now, let us know what you reckon to it?

Real Estate have scheduled dates in UK & Europe over the Summer, check them out here